Christ was born!... so Methodists could vote?

This morning, I woke up remembering how often I’ve said “A virtue of Methodism is it’s not in our DNA to wake up in the morning and think ‘We’re right, and everybody else is wrong’ – and how within Methodism, we can disagree without killing each other, or getting a divorce.

This recollection probably drifted into my head because last night, like so many nights in recent weeks, I went to bed grieving questions that had come my way about some Methodist church or another ramping up to a vote on whether to disaffiliate from the United Methodist Church. When I hear this, I shudder, and try then to recall the humorous truth of a clergy friend of mine who will snap a photo of the crowd during an especially tedious, cantankerous and dull denominational meeting, and text it to me across the room with the caption, “Another unintended consequence of the resurrection.” I saw a Facebook photo of church I love holding hearings to help them decide. Not what Jesus had in mind. 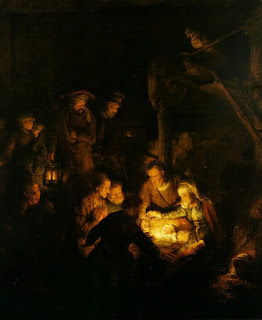 An unintended consequence of the resurrection? or since it's Christmas, of the incarnation? Jesus came so we could… vote? Zealously, I advocate voting – in the United States. In the church, it’s hard to imagine a more destructive activity. Quakers, and a great many other Christian bodies, don’t vote. They discern. And the kicker here is: United Methodists don’t have to vote. And shouldn’t vote. “Somebody told us we need to vote.” You don’t, and if they told you this, or recruited you, they are well-meaning, but misguided. If your church is gearing up for a vote, you can and should back up, take a deep breath, and not forge forward into what will inevitably be a church division – the worst conceivable witness to a skeptical world, not what Jesus had in mind when he came into Mary’s womb or went to the cross.

An analogy: Lisa and I have stayed married for 36 years. What if, for Christmas, we entertained speakers on the virtues of divorce (“I finally found the love of my life,” “No more socks on the floor”) vs. staying married (“He’s getting creaky but he’s a dear”) – and then we took a vote on whether to aim for 37 years. Thankfully, we don’t have to vote. We have disagreed with one another on a great many issues (as has our church) all along. What I find, with her, is that when it gets tense and I am sure I am right, I quite often am wrong. Being right is way overrated anyhow. As best I can tell, it only hurts the other person, and puffs up my ego.

Some say to me “We have to draw a line!” Did Jesus say this? Here’s maybe the single most important reason not to vote to disaffiliate: at the 2008 General Conference, I spoke from the floor and said "We have for decades declared that ‘We do not condone the practice of homosexuality.’ This has not prevented one person from being gay. It has, though, alienated tens of thousands not just from our church but from any church." Want to talk about an unintended consequence of the resurrection or incarnation? The question isn’t Who’s right? but, as in my marriage, Who’s hurt? I meet them all the time: people who used to go to church, don’t and won’t now, and the first or second reason they give is because the church is judgmental, and specifically because they judge and exclude gays.

Those who lobby churches to disaffiliate argue “It’s not about LGBTQ inclusion.” I’ve been wrong in saying they are wrong. I’ve been right, in that Methodists have strongly disagreed and stayed together over dozens of huge issues – but it’s this one that has created congregational votes. And yet, they are right. It’s about how to be the Body of Christ in this moment in history, when division is little more than a mirror image of what’s going on in our country politically. Instead of healing America, voting Methodists are letting themselves be ruined by America.

On sabbatical several years ago, I found myself in a pub, sitting next to a guy. I asked what he does in life. “I’m a shepherd.” This piqued my attention, so I quizzed him about shepherding, including this question: “Why are there always sheep and goats, never just sheep, never just goats.” He glanced upward as he stroked his beard and said “We just find that they do better together.” That’s United Methodism; we're better together. Instead of a smattering of broken-in-half churches all over this country, none thriving while all claim they are right, if we simply don’t vote, and stay with the one who brought us to the point, we can still be better together – an intended consequence of the resurrection and, since it’s Christmas, the incarnation.