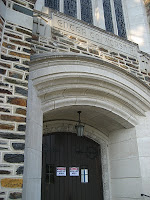 So our sanctuary is undergoing 6 weeks of renovations - and I could only laugh out loud when I noticed all the warning signs posted at the entryways: "Danger: Hard Hat Area." Naturally I thought of Annie Dillard's often-quoted thought from Teaching a Stone to Talk: "I do not find Christians, outside of the catacombs, to be sufficiently sensible of conditions. Does anyone have any idea what sort of power we so blithely invoke? Or, as I suspect, does no one believe a word of it? The churches are c

hildren playing with their chemistry sets, mixing up a batch of TNT to kill a Sunday morning. It is madness to wear ladies' velvet hats to church; we should all be wearing crash helmets. Ushers should issue life preservers... and lash us to our pews. For the sleeping god may wake someday and take offense..."

We had to bring in scaffolding, circular saws, and scarily heavy . equipment to render our beautiful sanctuary risky. "Oh, it's dangerous now? How long before it's safe to go back in?" I noticed the 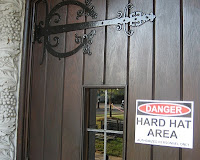 subheading on the Danger: Hard Hat Area sign - which adds Authorized Personnel Only. "Who shall ascend the hill of the Lord?" Psalm 24 inquires - and the reply, if authoritative for us today, would keep us all out permanently: "He who has clean hands and a pure heart."
And yet, at our denominational annual conference, we had a motion tabled - one about inclusivity. Nobody wants to talk about it: we are weary of the debate on how much inclusiveness is too much. Bizarre to me: it is precisely the necessity of clean hands and a pure heart that requires us to be utterly and uncompromisingly inclusive. Mine aren't clean or pure, and neither are yours - or anybody else's. Inside the building, the chemicals that catalyze the explosion are grace and mercy, which you never find outside a Church. So we realize what God requires, we realize we've whiffed embarrassingly - and that is precisely why we enter, trembling, hoping for mercy, needing nothing less than a transformative explosion of unseen power.
How inclusive then should we be? My small wisdom is this: if any one of us isn't welcome in Church, ever, for any reason, then none of us is ever welcome. God may wake up one day and be grossly offended we ever thought otherwise; God has already noticed, and is grieved - and wishes to strip the place, and us, down to the foundations and start over with us. Danger: Hard Hat Area. 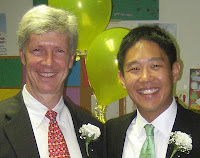 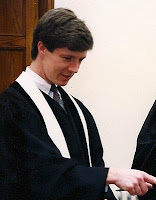 Now, that is no substitute for the real, necessary work of evaluation and professional improvement. But in Haiti, and Liberia, and Urbana, and Lake Junaluska, I watched people of all shapes, sizes, ages, backgrounds, walk slowly forward, kneel, have hands laid on their heads, and rise with smiles, or tears, with family beaming in curious pride, trudging away into the most uncertain future imagineable. Do they know the craft of leadership? Will they master Heifetz or Crouch or Maxwell or Peterson or the bloggers at faithandleadership.com and become wizards of ministry? I find myself uninterested in the answer to that question. I’m in some awe. A bunch of people whose faces I saw, and on whose heads I laid my feeble hands, had said “Oui” to whatever questions were asked of them – by the Church, but more importantly by God. I think all that is left to me is to thank them, or to thank God.
Posted by James C. Howell at 12:04 PM