Robert's Rules and the Church?

We Methodists are about to head to Tampa for our big quadrennial denominational meeting called General Conference. Like some beached whale, our church struggles to survive, and the underbelly frankly isn’t very pretty. I like to be hopeful that the creature can live, but worry that the way we do what we do at such meetings is an unacknowledged hindrance to healthy change. 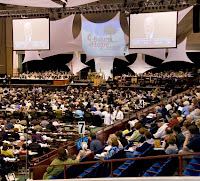 The ruin of not just General Conference but also the larger church will be the not so sacred procedure we unthinkingly use to decide things: Robert’s Rules of Order. When the faithful disagree, as fallen, imperfect Christians do inevitably, the advantage goes -- always -- to the one who is the master of the rules more than to someone who might have some wisdom or humble insight on their side, but isn’t swift to the mic or doesn’t grasp a “substitute to the amendment.”

Robert’s Rules fuel the unholy viewpoint that we have -- and should have! -- “sides.” Worst of all, Robert’s Rules seduce us toward a vote, where majority “wins,” and it’s winner-take-all. On an issue, the vote might be 51%-49%, but the “official” outcome is just one, unhedged thing. Winner-takes-all…and then we have “losers.” A political democracy works precisely this way with strategizing, clever plotting and fist-pumping victories.

But we are the Body of Christ, where we don’t have winners and losers, but members. According to Paul, the most valued member of the Body isn’t the big winner who is crafty in procedure; in fact, Paul would dismiss such bunk as the world invading God’s church. The priority goes to the weakest member. What majority vote would Jesus ever have won?

We may choose to speak of “holy conferencing,” but I suspect this is a cloak thrown over what our procedure fosters and even requires of us: just get the votes for my biased version of how I think church should be. Such a church will never be a true Body with differing members that embrace, appreciate and even honor the small.

Quakers know how to “discern” quietly, listening for the movement of the Spirit, refusing to vote in some fractional majority that will create wounded losers. In Tampa, stuck as we might be with Robert and his rules (how would we vote him out -- by nimble pluck and majority vote?), can we pray for holier minds and shun any who dare to maneuver? Or call up to the stage a handful of the losers, hug them and share with them leadership in the new, victorious petition?
Posted by James C. Howell at 7:21 AM