TIME and the EVERYDAYNESS

I’m already tired, and December doesn’t really begin until tomorrow. In Sunday’s sermon, I tried to talk about time – and how it’s like som 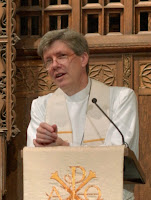 e rambling freight train picking up too much speed… and it’s full of just everydayness, which winds up not feeling very… full. Groceries to be bought, stuck in traffic, folding laundry, picking up a prescription, a dull meeting, scurrying off to a party you feel like you need to go to, vaccuming – and you look up and 5 days, or 5 weeks, or 5 years have just whooshed by.

We need more, we want something richer, more profound, some real love, a purpose – and we think that until we get out of that everydayness, that dull routine, we’ll never find what we’re looking for. Maybe we go online, check Facebook, listen for the ding of a text message, and we look, maybe out of habit, maybe hoping that what we really are needing but haven’t gotten just yet might just be in there somewhere.
The presents are coming! as are the guests, the parties, even the sweet Church activities. But will it be enough? Empty nesters miss their children, and the grieving miss their spouses, as do heartbroken, ditched lovers – and what we miss really isn’t something so profound or fantastic, but the everydayness, just sitting on the couch, washing the dishes, that kiss goodnight, hollering “Can you roll the recycling out?” – and maybe we can realize that life is the everydayness, that the love and meaning are in that everydayness or nowhere.
No grand journey around the world or to a resort, no perfect party with fantastic people, no sizzling gift, climbing Mt. Everest, nothing actually is sufficient to provide the fullness we seek. Partly, God wired us this way, so it might dawn on us that we crave something beyond, that we aren’t just coc 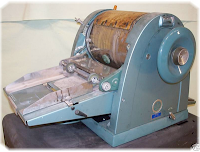 kroaches or squirrels; but also that we might learn, mysteriously, to find God in the everydayness.
The best thought in my sermon I stole from George Ragsdale’s sermon earlier in the morning – but turned out he’d stolen it from another preacher… Once upon a time we clergy spent Saturday nights running bulletins on mimeograph machines, which were maddeningly difficult to use, and you couldn’t avoid an hour of retyping, or the telltale ink all over your hands and shirtsleeves. One older minister recalled one exasperating effort, and in his chagrin hollered at God, “You called me into the ministry to do this???” Then he noticed that the maddening mimeograph machine was perched on top of the church’s old, n 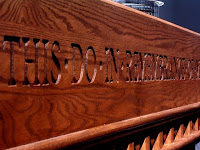 o longer used Communion table. Carved into the wood were these words: “Do this in remembrance of me.”
The everydayness. Can we notice what it’s resting on? Can we let a little voice whisper into our ear, every time we’re fumbling with a to-do list or hauling out the garbage or running late in the carpool or picking up a neighbor’s mail or … whatever we might be doing – “Do this in remembrance of me”? Maybe that’s the coming of Christ during Advent. Mary, after all, had to sweep the floor, she had to stack little bits of wood for a fire to cook supper, she rocked her baby and wipe his brow when he had a fever, her arms ached as she squeezed out the laundry – and she probably forgot from time to time that she was doing it for Christ. Advent is the season to remember, and to notice, or else the gale force wind of the month will leave us frazzled and for yet one more year it will end and we will have missed it.
Posted by James C. Howell at 4:46 AM