My son Noah and I have been visiting colleges, touring the likes of Jefferson's University of Virginia and the new surprise near the top of his list, the University of Richmond, schools with teams I've cheered against for years (University of Georgia? and will I really pay a nickel for him to set foot in Chapel Hill?), schools I attended (Duke, University of South Carolina)... and while we're enjoying making the rounds, we're getting a bit bored, as the information sessions led by some admissions staffer, and the campus tours, led by an enthusiastic student, all sound alike.  Everybody has special groups for freshmen, flexibility in choosing your major, no rush until 2nd semester, rapid response from campus security, meal cards and stellar food, accessible professors, intramural sports, countless clubs (and you can start your own if you'd like!), and every students has tremendous fun... blah blah blah.  Good stuff, but I may lead the next tour, on some campus I've never even seen before.  I really could do it.

What is most startling is the hype, the braggadocio - and not just the sales pitch, but what the presenters know will sell.  All this may strike you as obvious - which is why I'm writing this blog.  Every school touts their business school, great jobs on the back side of graduation, internships, contacts in the business world, and rankings, rankings, rankings.  Every school is #3 or #11 in business, or earnings for their grads, or in med school admissions.  When they ask, Are there any questions? I find myself wanting to say Tell me 4 things this school does poorly...

Actually, I'm more curious about what happened to old-timey notions of what education was for.  Aristotle, and most deep thinkers until the past century, would have said the purpose of learning is something like Wisdom.  Eleanor Roosevelt said the purpose of education was to become a good citizen.  For centuries, knowledge was precious in and of itself, like gold - not because it would earn you some gold, but because it was itself the treasure. 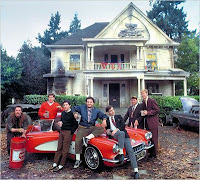 Knowledge is good - but wait, that was the motto of Faber College in Animal House, where Bluto, Otter and the other Deltas party raucously - but then, even though they made a mockery of their education, most became grand successes in the world post-Faber.

Certainly I want my son to get a degree so he can get a job.  And I want him to have great fun, and make lifelong friends during college.  But shouldn't college be the time you explore the deepest questions, and gain a fair amount of depth yourself?  Shouldn't college be a time to learn, not to get some loot when we're done, but simply to know, and to cherish that we have a grasp of history, science, philosophy, literature, the arts, old rocks, simply because human civilization is nothing less than all the accumulation of such knowledge gathered together?  Shouldn't education help us to be good? and thus good citizens? and people with insight?  Might it be that as we go deep into knowledge and wisdom we might wind up earning less money, and find ourselves ranked not at the top of a Forbes survey, but in some lowly place with humble or needy people?
Posted by James C. Howell at 1:20 PM