Amendment One in N.C. 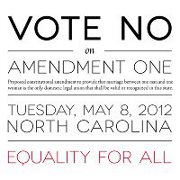 I know I have my opinion, and I know how I will vote on the marriage amendment.  What intrigues me, and frankly worries me, is the way we are talking about it.  No matter how much we admire America’s “wall of separation” between church and state, this issue has an inevitably religious core, and both sides prop up their viewpoint with religious arguments.  But sadly, what I’m hearing makes faith appear to be such a thin thing, easily manipulated to fit any political purpose, more of a blunt weapon than a bright lantern.

We have a liberal version of faith-talk that makes it appear that Christianity is love and nothing else, and a kind of love that is little more than tolerance of everything except intolerance, a compassion with no clarity.  And then we have a conservative version that makes it appear Christianity is nothing but a righteous veneer plastered on top of a narrow nostalgia, easily hijacked by right wing agendas parading as piety.  Those on the right thunder about “values,” while those on the left speak glibly of “rights” – but Jesus said nothing about values or rights.  Christians think about the “gifts” of God, not my “rights,” which are all about me instead of responsibility.  And Jesus didn’t say “Uphold solid values,” but “Follow me,” as faith is a dynamic, organic thing that moves and acts, whereas “values” get rigid and are more about my biases than living for God.


Jesus also didn’t say anything definitive about this amendment; and even if he did, should American jurisprudence enforce Jesus’ words?  If so, people who didn’t give everything away to the poor would be imprisoned, and the Pentagon might be ruled unconstitutional.  Because of Jesus’ silence on homosexuality, Christians wind up disagreeing among themselves on the matter; we could be well-described by Lincoln:   “Both read the same Bible, and pray to the same God; each invokes His aid against the other. The prayers of both could not be answered.”  But that is an in-house problem for us Christians.  What we see now is absurd:  not only are the Christians divided, but we have become a divisive force in the larger society.  Shouldn’t we be a force for good, to foster understanding and humility – to be a blessing instead of a problem to society? 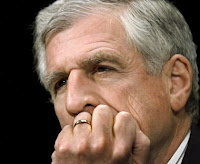 Former Republican Senator John Danforth warned us, “If we believe our political positions are absolute implementations of God’s will, then our political causes become religious crusades, and reasonable accommodation becomes difficult if not impossible. If we are less confident about our capacity to know and implement God’s will, and if our faith brings modesty about ourselves and our politics, our effectiveness is more likely. I believe that such modesty is, or at least should be, Christianity’s gift to American politics.”
Does Jesus provide any clues to help us?  I think so.  Jesus most certainly had pretty strong morals, and at the same time we see him befriending all kinds of people; in fact, the hyper-religious people hated him precisely because he befriended people who were different, and whose morals weren’t celebrated.  The one thing Christians must always be engaged in, no matter if they are “right” on this or that issue, is hospitality.  We can disagree, and we can say so openly; but we must be hospitable toward others, and as luck would have it, this is also an historic virtue of American democracy.


What is the mood, the tone of these arguments? and what might the end game look like?  When Christians bicker among themselves, and when we citizens, Christian or not, rail against one another on homosexuality and marriage, isn’t there a lot of rancor, and hurt, a shock that someone else could be so stupid.  And if my “side” manages to “win” or “lose,” then I will feel – what? – relief? disgust?  Will we congratulate ourselves that we have defeated our foes?  At the end of the Civil War, Lincoln’s poignant dream was “with malice toward none; with charity for all… to bind up the nation’s wounds.”  In the ramp up to and aftermath of this vote, some malice is being inflicted.  I find myself looking for a little hospitality, binding up of some wounds.


I suspect that if either “side” is of God, we would expect evidence like the Spirit’s fruit:  love, joy peace, patience, kindness, gentleness.  And above all else, if we are going to drag religion (as we must) into this thing, let’s bring a more robust, healthier, and more helpful brand of religion to bear on the discussion, not a yellow sticky stuck on our preferences, but a wise, time-tested conversation partner that can speak, and listen, with modesty, not a divisive force, but a blessing.  Come to think of it, that’s why I will be voting the way I will be voting.
Posted by James C. Howell at 5:17 AM