God, books, gaming and the internet

I’m afraid I’ve become one of those boors who bemoans the demise of reading.  I have a deep affection for my library, and for the great canon of literature, and as loath as I might be to admit it, a touch of the dilettante.  But all around me, bookstores are closing, it’s harder than ever to scare up a good conversation about a great book, and the electronic revolution has even seized what reading there is, with newfangled gadgets like Kindles and Nooks, semi-books without the tactile delight of paper, with severely limited capacities for flipping forward and back, or lining a shelf so people might come into my home or office and strike up a conversation based on the bookish décor.

My children, I tend to lament, have been swept up in this unfortunate turn in history.  When they were young, their noses were constantly in books.  But now their noses point to a screen, screens actually.  The internet, Facebook, tweeting have taken them hostage.  Yes, these do involve the reading of words, but it’s different, and tragic, I tend to complain.

As a pastor, I am especially gloomy about the way the universe has shifted on its axis.  Christianity is all about a book; God and reading go together; we know God through the Word, the words of God, not snappy, rapid images flitting about.  I wrote a blog about the important book, Hamlet’s Blackberry, expressing my concern that an attenuated attention spans and the vapid inability to be present (as the connected person is disconnected from here, and me trying to talk to such a person!) imperil the very heart of the faith; indeed, if I am always reachable, can I ever be reachable by God? 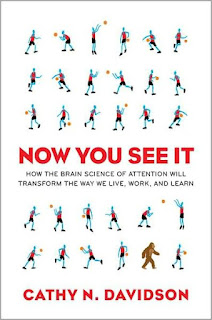 My answer has been Not very likely – until I read a book at the behest of a friend.  Cathy Davidson, who’s been involved at Duke with technological change, has written Now You See It: How the Brain Science ofAttention Will Transform the Way We Live, Work and Learn, pretty intriguing stuff, not only along the lines of “the train has left the station…” reality, but even suggesting not only that there are now new ways of learning but that brains are actually rewiring to think differently – and that the changes aren’t to be lamented but embraced, and even celebrated.  Academic grading will need to shift toward abilities not to recall but to connect, collaboration, and discernment over whether to trust what one happens to find.  Gamers will have a leg up.  I reported this to my son, interrupting him in the thick of SkyRim, and he uttered a smug “I told you so.”
So my question isn’t Shall we or How shall we use technology in worship or church life? but rather What does it mean for the knowledge of God, and even faith, if brains are functioning differently than they have in all of human history?  If learning is no longer linear or book-related, but more linked, connected, communal, then how will God be known?  Could it turn out to be that God is actually okay being known in non-bookish ways?  After all, Christianity began and spread among non-literate people; they were bookish but only heard the words read, or saw them depicted in mosaic or stained glass.  Will faith be less about what we know of God and more the patterns by which we seek after God? and will God even evaluate us based on how we poke around after things and work with others than our own privately settled past with God?
Posted by James C. Howell at 5:27 AM