Anxiety and the Christian 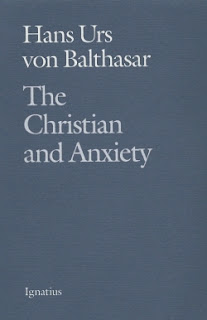 Every time I mention anxiety in a sermon, people become very attentive. We are an anxious people, living in an anxious culture. So I read, with considerable anticipation, Hans Urs von Balthasar’s The Christian and Anxiety. In this book, written in Switzerland 60 years ago, he approaches the topic, not from the perspective of psychology or therapeutics, but in an explicitly biblical, theological way. Quite rightly he begins: “When one surveys how often and how openly Sacred Scripture speaks of fear and anxiety, an initial conclusion presents itself. The Word of God is not afraid of fear or anxiety… For the Word of God, anxiety is not something to be ashamed of.”


Lovely. We typically suspect faith and anxiety are incompatible; but we need not blush if we are anxious. “God’s Word accepts anxiety as a fundamental given of human existence so as to revalue it from God’s exalted vantage point.” Von Balthasar doesn’t thunk the anxious on the head with the Bible saying “Don’t be anxious!” Instead, he “revalues it.”

How many of the Psalms, the Bible’s recommended prayers, are expressions of intense anxiety? We hear in the Psalms an opening up of anxiety to God, not hiding it. And there are two kinds of anxiety voiced in the Psalms. The human kind of fear and uncertainty in the face of what is unmanageable – but also an “anxiety for God’s reign and justice.” We see all that is not of God – and we quite justifiably feel an uneasiness, an anxiety, that God will right what is wrong, that God will come and deliver us. God does not mind when we feel we are merely hanging by a thread – “provided that thread is God”! Von Balthasar suggests that the anxiety of those who do not know God is futile; but the anxiety of the faithful is “permitted and will by God” as a “right and earnest fear.”

In fact, when Christ came, he bore human fear and anxiety upon himself! This human anxiety that is ours became his: “It rolled toward him in waves; at the grave of Lazarus it was an initial ‘shudder’ as he brushed against the world of the dead… On the Mount of Olives it was a final, precipitous plunge into the abyss of anxiety that immediately broke over him… All anxiety was here gathered together and infinitely surpassed.”

“It is, finally and most profoundly, the anguish that God (in human form) suffers on account of his world, which is in danger of being lost to him – which, indeed, at that moment is an utterly lost world! So as to be able to suffer this anxiety and therein to demonstrate humanly how much the world matters to him in his divinity and how concerned he is for the world’s sake: for this purpose he became man. It is an anguish he wanted to have without any consolation or relief, since from it was to come every consolation and relief for the world.”

The wonder of this for those who are anxious? “All subsequent anxiety is seen now to be revalued. Now it is possible for anxiety to participate in the fruitful anguish of the Cross.” When we are anxious, we are drawn very close to God; we participate with Jesus in the unmanageable weight of a world that is out of sync.

But Jesus didn’t come just to wallow in anxiety with us. “Human fear has been completely and definitively conquered by the Cross. Anxiety is one of the authorities, powers, and dominions over which the Lord triumphed on the Cross and which he carried off captive and placed in chains.” Indeed, Jesus’ constant invitation is “Fear not!” A kind of calmness is commanded, and possible under pressure. So we are not daunted by the “facts” that the world tells us we must tremble before; these are struck down by Christ’s resurrection, which subverts all such facts. “Christ has borne the anxiety of the world so as to give to the world instead that which is his: his joy, his peace.” The Cross is anguish – but the Cross of Christ “opens up something completely different: grace, and, in the measure granted by grace, permission to suffer anxiety as a share in Christ’s anguish. It is evident how thoroughly this grace revalues anxiety, and even turns it into its opposite.”

Mind you, von Balthasar presses us when he speaks of “sin-anxiety,” the uneasiness and fear we bring upon ourselves by bolting away from God, living self-indulgently, or simply ignoring the things of God. This “sin-anxiety” is “forbidden to the Christian.”

At the same time, our striving to be holy, our determination to follow Christ, actually induces a new kind of holy anxiety. You could choose just to live mindlessly in the world and not think much about God. But as soon as you make it your business to be holy, and to be a campaigner for the things of God, you begin to wonder if it is worth the effort. Anyone who is immersed in the things of God “will experience enormous disappointment with the world. The spiritual he is, the more profound his disappointment.” Not surprisingly, “to be a Christian in the Church requires courage. Courage is by no means the opposite of anxiety… We are talking here about the Christian virtue of fortitude.”

So von Balthasar is strangely helpful. Anxiety isn’t anything to be ashamed of; Christ is one with us in our anxiety. And yet the facts, the fears that drive anxiety have been surmounted by Christ – so our fears are set in proper context, and thus diminished, and managed not by us but by God. When we seek healing from sin, we reduce much anxiety – and yet we are comforted even in the thick of that holy anxiety that frets over the coming of God, the disappointment of living in a world that is not of God – and thus we who are anxious might simultaneously take courage.