My Visit to Good Shepherd

What fun for me to get to visit a church, and nobody knows I’m there.  This morning I popped in to the 10:00 service at Good Shepherd – United Methodist just like Myers Park where I usually find myself up front on Sundays, but pretty different.  Here’s a photo I took from the back (where I sat) next to one from the back of Myers Park. 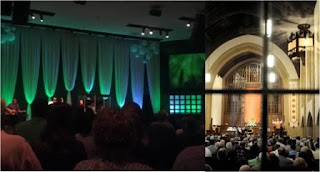 Facing a free Sunday morning, I’d chosen Good Shepherd largely because the pastor, Talbot Davis, is a good friend – and he visited my place back on Nov. 11, and wrote a great blog reflecting on his experience.  Here’s mine – on visiting Good Shepherd.


Driving past Carowinds’s Intimidator whirling up high, I was tempted to stop and ride – but drove on to the church’s parking lot, which featured marvelous signage, beginning at the street and on into the lot, welcoming me.  One sign was intended for me:  “First-time visitor parking.”  Great idea, but I found a shady spot instead.


Entering the place was intriguing.  Wearing khaki slacks and a short sleeve dress shirt, I felt a little bit overdressed.  A teenager at the door handed me a nametag.  I asked her if I should put my name on it, and she laughed and said, “Yeah, that’s kind of the idea.”  I stood at an information desk, where the people behind it were chatting with one another.  I interrupted and asked what they had.  The woman claimed “Oh, all kinds of things, including cds and dvds.”  I told her I would check out the quality of the preaching and then decide whether to get a dvd.  She said “I promise you, unequivocally, that the preacher is the best you’ve ever heard in your life.”  Hmm…


I found a seat, and even though at least one-fourth of those attending wandered in late, I was impressed that the place was packed – on August 4.  Excellence, attention to detail - lots of kinds of people. 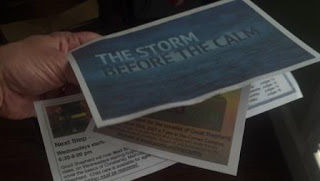 I sat down and pondered the bulletin,
which was very cool and captivating - but it made me grow uneasy, as it didn’t tell me what was going to happen or when.  Two cards were stuffed inside inviting me to something or another; well-done, they made me want to come.

One guy (named David) came up, shook my hand in with immense warmth, and welcomed me.  I was again impressed – but then when the music started I noticed he was a guitarist on stage.  An official greeter.  No unofficial person spoke – but I know this is normal in big church life. 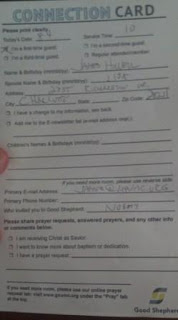 There was an information sheet in the bulletin, which I filled out, but couldn't figure out what to do with it - so now it is on the seat of my car.  It asked amazing things - like my birthday, and the birthdays of my children.  Will I get a card?  We pass an attendance pad at my place - which I see is probably outmoded and not as helpful as this card.  I should have listed a prayer request.


The music then started.  Very professional, warm – but I didn’t know any of the songs, and there was no music to help me know to go up or down.  The music was catchy, but the words were all about “me,” “I,” no “we” or “the church.”  God was a “he”; it would be hard to get away with that where I work.  And we stood for quite a long time – which was difficult for somebody like me with a bad back.  And it was dark…  The lights did come up (thankfully) when the sermon began.


During this extended singing, I counted about 50 people around me I could see well.  About one-third were singing, about one-third were maybe singing a little bit now and then, and another third didn’t sing one note.  But the music from the front was loud, so it didn’t feel like there was a lack of singing.  Almost every person, even those not singing, was bobbing up and down, and seemed to be digging the experience.  I think I bobbed a little.  At Myers Park, nobody bobs – but we really do need just about all of them to sing for the sound to be full.  My folks actually sing really well. 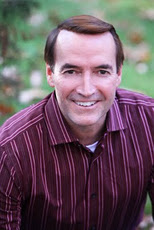 My friend Talbot handled the major welcome – and announced a major staff change right on the spot!  Very engaging, enthusiastic, speaking of God’s role in the decision, with lots of “your board,” “we,” group language… and then he prayed over it.  Lovely.  No robe, no tie; not 1 person in the place wore a tie!  Felt like he was up close, even in the huge auditorium.


At sermon time, Talbot walked on stage to sound effects, like a storm at sea (which was his topic).  I’d studied ahead and knew he’d be preaching on that kooky text in Genesis where Noah gets drunk and naked, only to be covered up by his sons.  He prayed, saying “God, I can’t do this without you” – and then talked.  Very warm, clear, loads of charisma, a genuine feel, and wicked funny.  Hilarious intro stuff, and then, 7 minutes in, he made his first memorable point:  we are vulnerable after a success.  Well-played.


Talbot debunked crass misreadings of Genesis 9 (pointing out quite humorously that Noah’s curse was in fact made when he was drunk and naked…), and focused on the idea of the messes we make, and who cleans them up.  He spoke of edgy things that might make my folks shiver:  incest, drunkenness, nakedness, taking advantage of someone drunk.


The sermon lasted precisely 31 minutes.  That’s 2 sermons for me at Myers Park!  Talbot is a terrific preacher, very real-life, personal without getting maudlin.  I wanted him to work on Jesus and grace a little more…  We pastors always rewrite other’s sermons while we’re semi-listening to them, and I thought about the sons covering Noah’s mess, and thought if I were preaching this I’d pick up on the image of the "covering" of mercy and grace, and healing power of that covering mercy.  But then the sermon would have stretched to 41 minutes…


And then it all ended, sort of "Okay, we're done now" – and they hadn’t taken up an offering.  I was planning to drop a check for $15,000 in the plate… so they missed that opportunity.  I wonder how they raise money.  As I exited, I noticed the folks were friendly with one another, although nobody spoke to me, which was fine.  Talbot seemed – happy? – to see me; we clergy never expect to see one another on Sunday morning!  And another young person handed me a little piece of paper I could use to find an online ebook.  Back to the parking lot where I was even happier not to be in visitor parking, as I was still in the shade!

And then I drove home, grateful for the chance to be in a place with décor and music and dress and the whole experience so different from my home church, and yet both certainly United Methodist, both very devoted to the living God, who makes all of us unidentical children into holy sons and daughters in God’s family.
Posted by James C. Howell at 11:06 AM