With much wisdom and foresight, the founders of America built a “wall of separation” between Church and state. Thomas Jefferson was adamant that the state has no business forcing religion on anybody, and that state-sponsored religion is a bad idea.  I would say the Church was the true winner (if we consider the demise of government-run churches in Europe...)! Garry Wills explains: “Jefferson was trying to save a secular republic from the superstitions of the past, Roger Williams was trying to sequester religion from the interference of earthly rulers."

Yet something something went haywire with this reasonable separation.  In some ways, religion has been silenced as a moral voice in America. 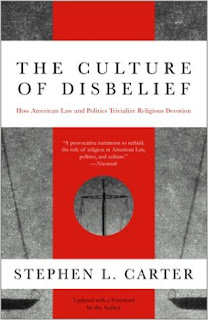 Stephen L. Carter is right: “In our sensible zeal to keep religion from dominating our politics, we have created a culture that presses the religiously faithful to be other than themselves, to act publicly, and privately as well, as though their faith does not matter to them.”  Church and state are separate – but we can have a conversation!  In 1970, the Supreme Court clarified that “Churches, as much as secular bodies and private citizens, have the right of vigorous advocacy of legal and constitutional positions.”


But something else is even crazier nowadays.  In my experience, when someone chides me for stepping over that line between religion and politics, it is not so much that I have said something “political.”  Rather, I said something that disagrees with or pits Jesus against my critic’s political ideology.  If I say something that agrees with someone listening, they never rise up and denounce me for stepping over the church/state line.
You see, everything that matters in the real world can be labeled “political,” since we wind up having laws, policies and government programs related to all those things Christians inevitably care about:  because of Jesus, the prophets and apostles, we harbor strong feelings about war and peace, or when life begins, or the plight of the poor, or strangers within our borders, or character, honesty and virtue.  As people of faith, how could we function faithfully as citizens or voters if we had to leave God in a drawer at home or in the pew at Church?
In my tradition (and as is the law, given the 1954 Johnson amendment regarding church’s tax exempt status!), clergy don’t endorse candidates – although conservative evangelicals do, the African-American churches do, and the Roman Catholics do!  What we must do, during an election year and every year, month and day, is talk about and labor for the things that most clearly matter to God, the campaigns Jesus, the prophets and apostles waged.
We need to calm down and not get our back up if we hear something biblical and it seems to jam up against our political ideology; we should thank God, and try to see if there is a way to get closer to God, and more engaged in God’s adventure on earth.  We should gravitate toward candidates who mirror Jesus to us more clearly than others, and to policies that enact something resembling the kingdom of God – and we are slackers if we don’t invite others to join us, albeit respectfully, and humbly, and with an open mind that might be changed at any time.
So if God, and God’s Church, have something to say to the state, to its leaders and its citizens, what might that be?  Next week we will think about how Christians think and talk, and then what they need to say.
Earlier installments in this series are archived here
Posted by James C. Howell at 7:20 PM