In a presidential debate at Wake Forest back in 2000, George W. Bush spoke wisely: “I think the United States must be humble, proud and confident of our values, but humble… If we’re an arrogant nation, they’ll resent us.  If we’re a humble nation, but strong, they’ll welcome and respect us.”  God honors humility, the foundation of all that is good.

Back on Palm Sunday, 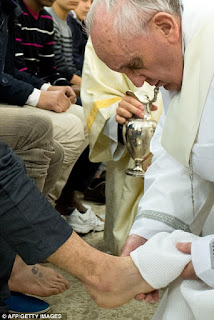 I pondered the way Jesus entered Jerusalem, and contrasted him with the politicians who were clamoring to be President at the time.  Candidates are arrogant and angry, and they play on fear.  But for us Christians?  Our leader, Jesus, was humble, not angry, and entirely courageous.  The dissonance makes you tremble.  Isn't Pope Francis's Christlike humility the secret to his joyful leadership?


I wonder if humility might be the key to unlocking what’s wrong with us.  It’s an interior thing for each of us:  am I humble in my viewpoints, and with respect to others?  Humility, if it spread among us like a contagion, would put an end to the venom.  Do we have any idea how ridiculous we sound?  A President is elected, and we angrily attribute all evils, the weather, gas prices, anything unpleasant at work, to him or her – and weirdly, we hope he fails.  If only my guy had been elected, all would be sunny – and anything amiss would be his predecessor’s fault, or Congress’s fault.  Humility is merciful when it finds flaws.  Humility doesn’t blame.  Humility honors.

Once upon a time, Americans hung a photo of their President on the wall at home – and not merely if it was the guy they voted for.  Humbly, they accepted, honored, and prayed for their leader.  This is humility.

What if, then, we looked for humility instead of cocksure arrogance in leaders?  Humility is the best conceivable trait in a leader, for wisdom is understanding what you don’t know, and how much help you actually need.  Humility is being able to say I was wrong.  Humility can change its mind.  Could our political climate change so that, if a politician changed his mind, instead of accusing him of waffling, we would honor him for growing? 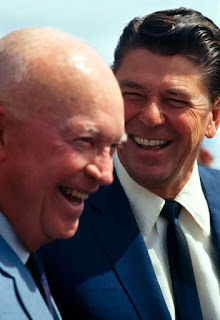 The word “humility” is an inch from the word “humor” – something that’s nearly vanished from the political landscape.  The ability to laugh – not at others, but at yourself, requires humility.  Ronald Reagan was the master of self-deprecating humor.  When quizzed about taking afternoon naps, he replied “It’s true hard work never killed anybody, but I figure, why take the chance?  I’ve left orders to be awakened at any time in case of national emergency, even if I’m in a cabinet meeting.”

What if we had a humility about what we expect of government?  How unreasonable are we to demand a booming economy, no trace of military threat, an end to social woes, and each person’s private biases being supported?  The humble can seek more modest ends, and understand even the best of governments can’t get it all done.  “Christian communities must learn how to work 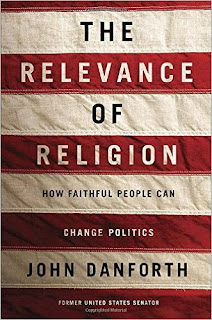 vigorously for the limited change that is possible, to mourn over persistent and seemingly ineradicable evils, and to celebrate the good wherever it happens and whoever its agents are” (John Danforth).  This is humility.

And, apart from the ways humility could transform us and simultaneously politics in America, it is even more important that humility is pleasing to God; the humble are close to Jesus, and very much like Jesus.

** FYI, earlier installments of this series are archived here. To subscribe, email me.
Posted by James C. Howell at 10:59 AM