I’ve always been fond of Paul’s words from a prison in Rome, when he was frail and facing the end: “Our citizenship is in heaven, and from it we await a Savior, the Lord Jesus Christ” (Philippians 3:20).  Paul often trotted out his credentials as a citizen of Rome – something to be proud of.  But in the end, he knows his true place isn’t anyplace down here, but his belonging, his true home, is in heaven.

Yet Paul was no despiser of this world and even its governments.  In Romans 13 he speaks of the very people who would conflict with him politically:  “Let every person be subject to the governing authorities… Pay to all what is due, taxes, revenue, respect to whom respect is due, honor to whom honor is due.”

When I was in junior high and high school, we took classes on “Citizenship,” and were even graded on “citizenship.”  We learned about local and national government, but also with a sense that a “citizen” was who you should be – somebody involved, in working for the public good, in forums, in town hall gatherings, in volunteering.  A citizen doesn’t carp from the sidelines.  A citizen gets engaged – and God calls us to be citizens, not only of heaven, but on earth. 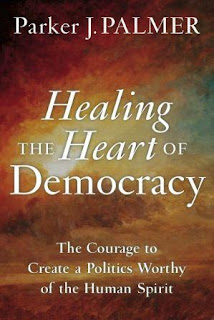 Parker Palmer defines citizenship as “a way of being in the world rooted in the knowledge that I am a member of a vast community that I depend on for essentials I could never provide for myself.”  For Palmer, citizenship is not a burden, but something to be grateful for – and thus our life is about “trying to be responsive to its needs whether or not my immediate self-interests are met.  Whatever is in the common good is, in the long run, good for me and mine.”

In our day, in an un-Christian way, citizenship gets replaced by consumerism.  Or, citizenship gets perverted into complaining - or griping.  As complainers who sit in our living rooms, do nothing, but grouse about what’s wrong out there, we become what Palmer called “barbarians at democracy’s gate.”  And more sadly, as Palmer explains, “we drive from the public square citizens who can’t bear this life of political combat.”  Wow.  Have you, or I, caused anybody to back away from getting engaged in community life because of our passionate but angry mood about a candidate or an issue?

If you are looking for a prescription for citizenship in the Bible, look no further than Jeremiah 29: God says “Seek the welfare of the city where I have sent you into exile, and pray to the Lord on its behalf, for in its welfare you will find your welfare.”  This is biblical, this is American, this is God’s desire for us – to be citizens, to get out of the living room and get involved, to make a difference, to pursue the welfare of the community where we find ourselves.

When the Christian engages in citizenship, we need to think clearly about those thorny, terribly misunderstood issues – the relation of politics and religion, and the separation of church and state, to which we’ll turn next week.